Now I can ‘Use as’ - ‘style’ and target by class for the image to be inserted inline. But I would much rather do so through CSS. Is there no way to do so with Blocks? I would appreciate any help.

Also, is it possible to replace the Wordpress colours with my custom colours, or most I hardcode that?
Background image paths within Pinegrow can be unpredictable when exporting to a Wordpress theme, especially with Sass. I built a CSS Grid hover gallery and the img src had correct paths but href’s links I wrapped them in did not, once exported as a theme. 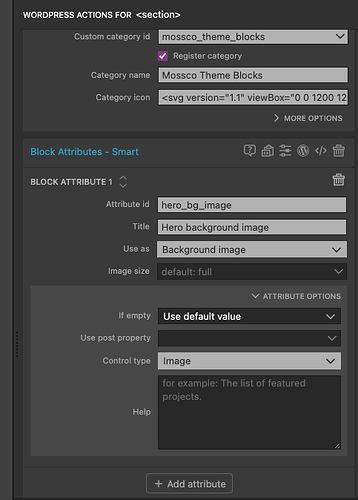 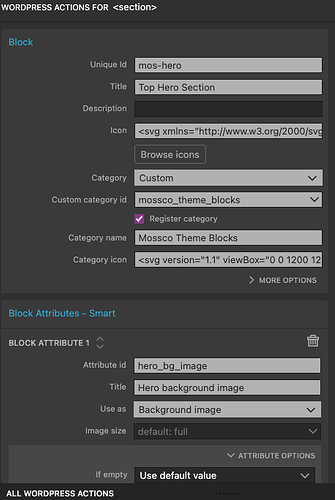 Thanks @deirdre_nic, I found and fixed a bug with Bck image attributes on the top element of a dynamic PHP block. The update will be out today or tomorrow.

A workaround is to add an inner wrapper element and add the Bck image attribute there.

WP colors can’t be changed with PG at the moment. You could add a custom theme.json to the theme to do that.

I did figure out that work around. Thank you for fixing that bug

I don’t know if you have noticed the bg image issues in SASS as well. The paths deviate. Especially when you turn it into a WP theme. I will use the visual interface to select a background image, place the inline bg image in a SASS file all through the interface (and I have hardcoded it as well). Thats when the paths to that image comes in conflict with Wordpress.

I don’t know if you have noticed the bg image issues in SASS as well.

Yes, that’s a known issue. One workaround is to have two copies of the image: one in the original location and the second copy in the location where compiled CSS is looking for it.

Ah I see, thank you.