As mentioned in a previous answer, we are closely following the evolution of the latest native FSE feature and we hope to integrate the new features in the coming months.

In the meantime, generating a theme in the classic way associated with Gutenberg blocks, of which Pinegrow can generate 3 different versions (Native React, PHP and ACF), is still the current method, supported by WordPress for many years to come and used in 99% of the themes currently available on the market.

By the way, speaking of blocks, we demonstrate an excellent example of using blocks in our new Shop Builder for WooCommerce course: Creating custom WooCommerce themes - Course | Pinegrow Web Editor

IMPORTANT: I would like to take this opportunity to point out that this course, divided into 60 lessons, contains a multitude of tips to facilitate the development of WordPress themes with Pinegrow and is not limited to the use of WooCommerce.

Whether you’re interested in WooCommerce or not, take the time to watch it, you’ll learn tons of useful things from watching Matjaz, the author of Pinegrow.

Thanks for reply @Emmanuel
That’s the answer I wanted to hear. Pinegrow is not only a good program but also a very good tutorial for us. I’ve been using it since version 2. I purchased Shop Builder for WooCommerce. I’m also watching your course. Thank you for such a nice work. WordPress FSE is not yet fully stabilized. I am aware of this, I hope it will be adapted to Pinegrow without wasting too much time. But please let’s not pay extra for FSE

Believe me, I have never made a website with Pinegrow and made a commercial profit.

Strongly agree with @smemis WordPress FSE is the future of WordPress.
Can only say, if Pinegrow is smart, they deliver us a solution for it asap and pick some of this market share. Because this will be a killer feature.

I got to know today that FSE can be hybrid of a normal wp theme + fse template. It will search for html template first and if it does not find it then it will go for the php template file. May be Pinegrow can adapt to the hybrid approach until it wants to go completely fse. What do you think? @matjaz

I also think that the hybrid approach could be a cool middle-thing until FSE is really full supported. It is fast to implement and it does help a lot.

To bring in an example. I’ve got a new project where I have to create 13 Websites for a company. They all have to look kind of the same, but not exactly. That’s where the parts/template editing comes in very handy.
I’ve adapted the PG theme to support hybrid theme now by myself. But If i think a bit further, a Interface where I can control which theme_support get’s added and which not (not only for FSE, but also for other stuff) would be a really cool thing I guess!

I think they fucktup. Instead of moving with the future they bring in yet another wordpress plugin nobody asked for.

That seems a bit hard and unfair in my opinion, the latest update brought really a lot of stuff which is super helpful (Enhanced Menu creation, Auto-Versioning, smaller updates regarding block creation: multiple: false, how they enqueue scripts, and so on … ). The Plugin Version uses the same code-base as the desktop version. I think it will definitely help in increasing the user base and that means in increasing incomes and a sustainable future!

I would also think twice or tripple if I adopt my software to a not very matured project. It can cause a lot of headache and a lot of adaption and troubleshooting with each version!

But I do think that it’s time to slowly move in that direction and maybe include a few minor features into Pinegrow and see where it’s going.

Was playing around with the FSE and Template Parts stuff the whole day (didn’t ever really test it in detail yet), and I have to say it definitely has it’s benefits. Giving me the ability to easily maintain sites without touching pinegrow seems like a cool feature, so I don’t have to run that often through the “build” pipeline. But what I really enjoy about pinegrow is that I can clearly decide which aspect a customer can change and which not, not sure if I give that ability away with FSE… we’ll see!

I think they fucktup. Instead of moving with the future they bring in yet another wordpress plugin nobody asked for.

I think it is important to clarify a few points:

So, maybe we are not going fast enough for those who would like to have all the WordPress novelties available immediately, or who would like even more, but this is no less a reason to use insulting or rude terms to qualify our work.

As much as we take all discussions and constructive opinionated as boosters to improve ourselves, rude or abusive comments have no place here.

I am setting everything up as a FSE theme and i am not running into any issues. It is maybe not as easy as having it build in natively but also not hard to implement it at all. Just create the necessary folders and files and FSE is enabled.

The first FSE i did was in the desktop version and right now i am setting up everything within the PG WP plugin and it is working great. Desktop and plugin work the same for that.

I created the templates folder and the files i need. Still working on it. Template parts i don’t really use. Find it easier to create a header and footer block and turn that into a reusable block so it’s global when you make changes to it. 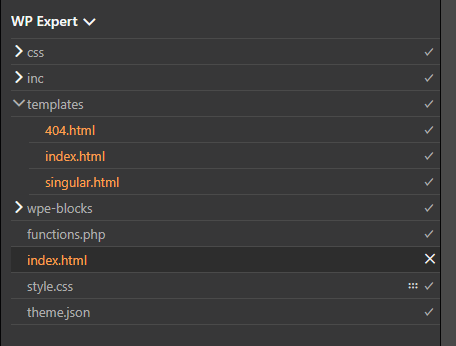 Yeah totally easy, but still a bit more work to do xD

There was only one thing for me which didn’t work as expected. In the WP Docs it says, that all I have to do is add the folders “templates → index.html” and then FSE is enabled for classic Themes. But that didn’t really work for me. Had to add a theme.json to make it work!

@Wolfgang.Hartl Did you have a styles.css file as well? Theme.json should not be required to create an FSE site, just templates > index.html and styles.css.

I’m also already creating all new themes in FSE… I get that some people will always use the old way but there are too many benefits with FSE (even in beta) not to use it. I’m not really sure how PG can adapt to FSE as most of it will require building patterns/templates in WP first. The only thing that would be nice while PG “waits to see” is automatically exporting files in the parts/templates directories to WP as those are the standard directories for FSE templates/parts. I believe the patterns folder already automatically exports the files in it.

Yes, it worked without the theme.json but whenever i wanted to open the template editor it results in a white screen. Didn’t test any further as it worked perfectly fine with the theme.json and I’m using it anyway…

For anyone who is curious, there are two ways to activate the editor in FSE:

If you still get a white page on the editor, it could be:

Interesting Point, I’m definitely gonna try number 2, that could be the problem!