Since PineGrow has no built-in spell checker… what do most of you folks use to check for spelling and typos? I find that that the more fingers I use on my keyboard, the mpre tpyos I gte.

more fingers I use on my keyboard, the mpre tpyos I gte.

Here is what I do - and recommend (or even expect):

WebDev is the most efficient by following a specific working order.

One thing so called (or self-called) “WebDesigners” never do - is respecting “text” has already to exist before starting with any line of code! You can’t make a well-structured site without having this golden rule of “content is king”.

This is a simple text-file which contains all copy text and headlines. And - that’s the point - all of those text-editors (you can take any) you’ll create the core-element have spell-checker already inbuilt.

Those text-files can be handed out to everyone (your wife/husband, daughter/son, neighbour, friend, mate … ) to double-check. The more eyes the better.

Try it out - you’ll wonder. My two cents.

I use Tiny Spell http://www.tinyspell.com/ Flags spelling errors on any keyboard input. Lots of options for how works.

I love Pinegrow, but to my mind having no spell checker is one of its biggest failings. Web sites are word-based. I agree that the initial text should exist before starting coding, but after that on dynamic web sites with constantly changing content I simply don’t have time to enter text in one programme and then in another. And as Thomas points out, most other code and text editors do have spell checking built-in, so why not Pinegrow?

Don’t take me wrong here, guys. If a spell checker is something inevitable - why not having it in Pinegrow. 100% plus on this - if you make it multi language, please. I love having tools making things easier and better.

But if something has to be “permanently” changed and adjusted and fiddled and whatever, I allow my self calling this a wrong basic concept. So I’m curious @tony789 which kind of projects requiring that constantly changing stuff?

Hi Thomas, one example I manage is a website for a residents’ association that is updated with local news and issues on an almost daily basis.

ok, well I haven’t done this and it isn’t a direct solution, but it’s a free work-around that should work:

I hope you like it and I hope it helps (and I hope it works ;)! What I haven’t done is try to use tinyspell in a code environment. I would expect a huge slew of false-positives.

note: You will have to sync VSCode & Pinegrow together on the same port.

Hi again, I found a nice spell checker named Asutype, that works well within Pinegrow. Mostly English dictionaries (UK, US, Canada, Aus/NZ), but Spanish and French are also availabe. It checks spelling as you type and suggests the correct word in a pop-up window. You can also copy and paste text into its clipboard for checking by using a hotkey combination. There is a month-long free trial period (and I’m only on day 2 so my opinion may change), after which it costs US $40 - https://www.asutype.com

Sounds exactly like tinyspell above only a lot more expensive. I don’t know how well they would work in a coding environment.

But I would suppose you can turn them on only when you need them.

Yes, they both work similarly, but I couldn’t get on with Tinyspell. Asutype works better and easier (more intuitive) for me. Both have the option to start when you boot-up and both can be set to work on all or just some specific programes.

@tony789
Some form of Asutype is what should be included in PineGrow as its native checker. Alas, this app is for Windows and I use a Mac. Pinegrow is the ONLY app I own and use that does not link in with Mac’s built-in spell-checker. Perhaps if Matjaz is reading this, he’ll consider adding one - or at least write an API that allows third party checkers to review what is being typed within PG.
To make Pinegrow a premier developers app, future versions should include:

I’ve placed this as a feature request in that forum… no response yet. NOT ASKING FOR MUCH HERE, REALLY!

Not really serious but what about writing things right without any spell checker? Should be possible too.

Well, they created an API and pliugins for external text editors so…
…if you use any other text editor, ie
Atom
VSCode
(obviously I’d like SublimeText

)
… they have spell checkers available for those, with various language libraries.

unfortunately, this one is now defunct and used to also check grammar.

An extension to VSCode for spell and grammar checking. - microsoft/vscode-spell-check

they recommend this one.
https://marketplace.visualstudio.com/items?itemName=streetsidesoftware.code-spell-checker

There are probably others.
infact, a quick check within VSCode itself.

The same goes for Atom
windows has this

and again… just using the in app extension installer…

SO, since the PG devs have acknowledged that their text editor isn’t the greatest part of the app, they then developed the external text editor plugins…
which… have…spell…ztshekurs.

so I really cannot see what all this hoo ha is about.
At all.
Really< I cant.

N.B just for the record, I’m also on a Mac, so those spell checkers are available to install for me,
and …>>I also dont like either of those text editors!
But I shall try and tolerate VSCode’s behemoth sized app, just because it looks pretty.
but again…>

ps, for the Mac, I also use bbedit a lot, not to its full extent, but it also has spell checkers and has a very good free version (which was called TextWrangler - this is now discontinued but there is a free version of bbedit to replace it.)
I use it for just about all my text files and have to agree with @Thomas above on the importance of the text content. PG’s text editor isn’t really suited for creating piles of voluminous texts, so you might just wish to create all your text content outside of it - and then … you are using an external editor - which more than likely has a spell checker.

you can find it here
https://www.barebones.com
its been going like forever… again, it would be nice if this played well with PG via a plugin

But, yes, for small edits and quick text entry I see your point of adding it to PG, but the text editor is a little lack lustre in that department. It took a little while for a clipboard to appear in PG though, so you never know, we may get a spell checker too, but for any lengthy text it helps to use an external editor where you get other funky tools too, like line/word count etc

Sorry @schpengle, I disagree… the bottom line for me is the speed and convenience of things built-in. Why purchase, install, learn and have to use several apps that one app could/SHOULD be doing?

Yep. That worked and I now have VSC working perfectly in sync with PG. Thanks for your help @Marf!!

so since your using VSCode, after finally getting it working, and it has that list of spell checkers it seems like a mute point.

i’m inclined to use an external tool to compose the body text since PG is terrible the kind of word processing task that would allow you to compose a word type document (with formatting, puncuation and flow and … spellcheck), then using that tool to generate the simple html to reflect how you want the markup to go.

now, i can save a word document as html, but holy cow it’s full of garbage… it would take as much effort to strip out all the inline styling and other garbage than it would take to cut and paste all the indivudual bits of text into sparate h1, p, and a tags.

what i’m looking for is a simple word processing app(with spellcheck) that can save a document in CLEAN html so that what’s generated with save as html can be just one copy and paste away from the body or main of my PG webpage.

i’ll do all the styling in style.css.

ConstEdit is a useful word processor software for Windows. This freeware lets you focus more on the content of a document and less on its formatting.

notepad++ does not appear to have any document composition features, it’s just a plain text editor

but so far, i’ve found a windows .exe version of the constEdit tool (the current version exists as a chrome extention, and i don’t do chrome anymore).

the pc version can be found here 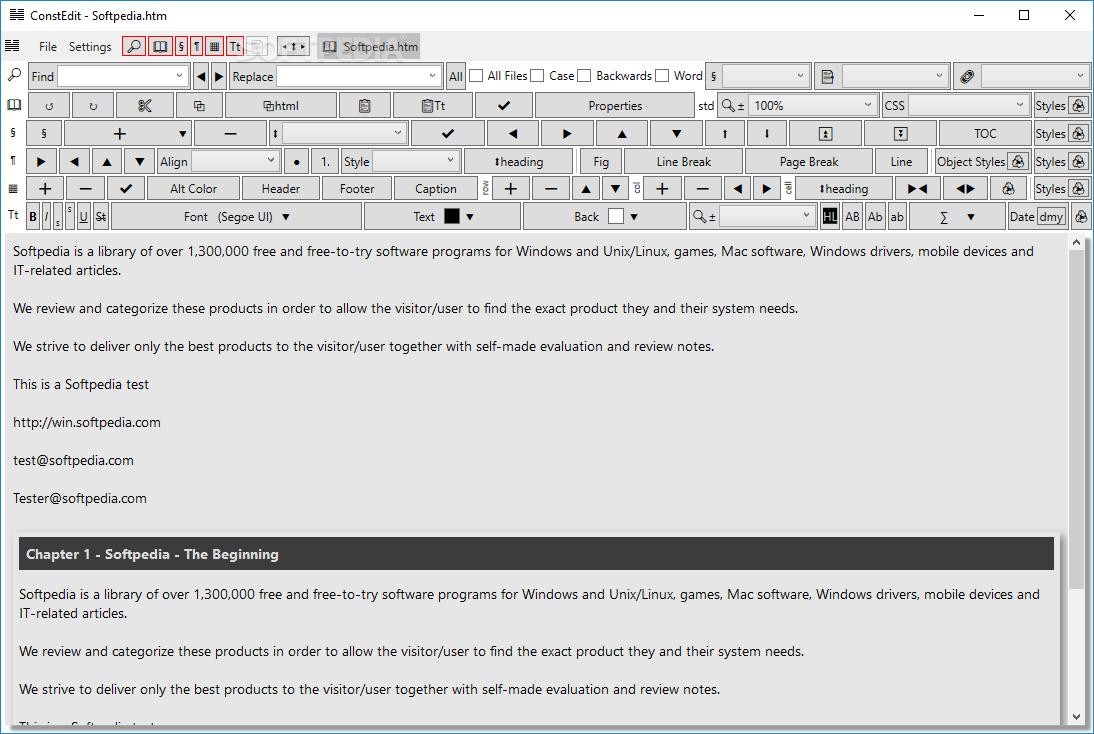 Download ConstEdit - A HTML5 editor that comes with a full-featured editing toolset, enabling you to customize the page layout and change the text style before saving

and it has the features i’m looking for

spellcheck (with custom dictionary)
wysiwyg visual composition environment
export clean html (mostly, depending on how fancy you make your document)
easily imported to PG using the INSERT CODE feature on the library tab.

A pretty cool feature within PG would be something like:

I’d call this “reverse engineering” on its finest. But hey, you know what? Because of frameworks, blocks and templates and all this f******g stuff, a method like this would be only for a handful of people - kind of unprofitable arts for the devs.

PG does provide the INSERT CODE feature on the library tab.

there you can paste any kind of markup (including inline styling, if you really want to) and it populates the [body] of your html page in PG with the exact contents.

it works pretty clean, in my opinion… i just wish i could make the text window bigger when i need to.