Okay, maybe this is more of a “random thought while I take a break from work” than anything else. I’m adding the feature request tag so Team Pinegrow can noodle on it as well.

I’m working on a project where I can’t use frameworks like Tailwind or Bootstrap, and it’s reminding me of how much I hate managing and organizing CSS. I’d normally use Sass to help with this, but since I want to use the Pinegrow WordPress Plugin, that isn’t an option at the moment. Even with Sass, though, all those partials start to get unwieldy after a few pages of unique components.

I would love to see Pinegrow give us some tools to manage my CSS better.

So here are my thoughts…

So what are your tricks for wrangling CSS? Or, if you don’t have any tricks, what things do you struggle with?

FYI: Principles of writing consistent, idiomatic CSS. (github.com) is a fantastic reference if you write messy CSS like me and want to start getting it under control.

@adamslowe Thanks for that CSS Principles link. That’ll be something I read thoroughly and try to adopt ASAP.

As much as I love being able to use the visual editor in PG, at this point until I fully learn where everything is like the back of my hand I’m mainly just banging out CSS in my stylesheet directly and then linking it up through the element properties. Not the most efficient but until I brain map the visual editor in PG it’s faster than hunting through the interface for things I can’t remember the location of. Hopefully only a few more projects until this type of workaround won’t be necessary any longer.

In regards to #2, I have /* ===== Pinegrow Added Below ===== */ with a couple returns under it at the bottom of my stylesheet for when I actually do use the visual editor so I remember to move the generated styles into their proper locations in my stylesheet. Again, not the most efficient but it’s something I’ve grown used to dealing with for the time being.

I do a combination of writing and clicking. The text, margin, display, and flex groups are my favorite, and I can quickly add whatever I need with just a few clicks. It really is a time saver!

Also, the more I use it, the more in love I’m falling with the Create New CSS Rule dialog. It makes building selectors super simple. I especially like how it shows me how many elements my new rule applies to! 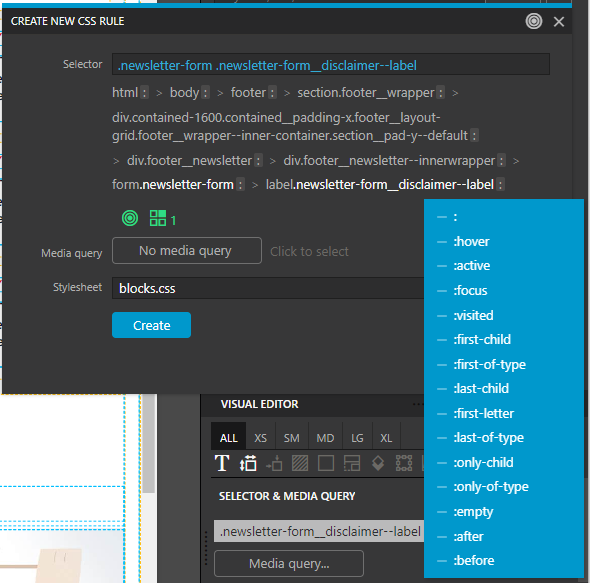 @adamslowe thanks for taking the time to write this up. I’ll add my thoughts too:

2/5. Organizing rules | I also struggle with this. It’s fine if you’re not doing anything complex but as soon as it gets complex the way PG adds classes to the bottom is painful. Support of SCSS in the UI would solve this issue, but yes a UI to drag and drop would be nice too especially if you could drag and drop with nesting in other declartion blocks.

For now, my solution is not to use the UI very much (although it is nice). Since I’m forced to use the code editor I really wish PG had a better integration with VScode that worked the same as its internal code editor… that would be a godsend.