Hi there, just letting you know there appears to be a disk image issue with the x64 image installer for Intel Mac. 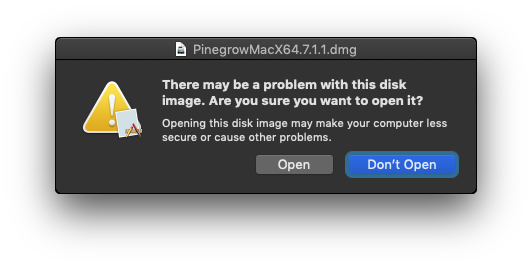 the highlighting of the media sizes which have styles applied is neat.

UPDATE.
no problem with the Arm/Silicon installer

Thank you for this feedback.
For my part, I do not encounter this problem. Opening this disk image, downloaded from the homepage, does not show any warning. (Intel Macbook Pro / Monterey 12.6.2)

Ok, I’ll try and download it again later incase there was a ghost in the machine
Mojave 10.14.6 here.

@schpengle - It must have been a one-shot hiccup/corrupted file. I am also running MacOS 10.14.6 and the download of Pinegrow 7.11 worked fine with no problems.

edit/correction: Now that I think about it, I think I got that same warning box that you did, but just ignored it and went ahead. And apparently it all worked fine

Yes—I think I see the answer. The ‘updates’ never have minimum system requirements and my update borked. The application wanted to load but didn’t arrive at the opening desktop. Upon further sleuthing, I suspect it has something to do with the fact that the machine I use is still on High Sierra 10.13.6 (Company network reasons). I couldn’t even get PG 7.0 (what I was using) to install again, so I had to go back to 6.8.

It would be helpful if Pinegrow mentioned the minimum OS requirements on updates. I wasted the better part of a morning digging into this.

This is not related to requirements.
Here is a definition that I found while doing some research and that seems the most plausible:

That is a generic error message when the mounting of the DMG may cause stability issues. It’s not the result of an Antivirus or Malware check.
The key here is that the original DMG was damaged, maybe not in any way that harmed the application stored on it, but the DMG was indeed bad…

AND: I confirm after testing the volume with fsck that there are some issues. Not enough to kill the app, but enough for macOS to send a Warning for some of us.

Big Thanks for your feedback.

We are going to fix the situation quickly.

FYI, here is the procedure that allowed me to test the DMG:

You first need to associate the image with a device, then pick the correct fsck tool for the file system type and run it against the device.

Using hdid to map the dmg to a device:

Note the Apple_HFS on disk1s2. Now we can fsck it:

Thanks for the response. Certainly beyond my level of knowledge.

Anyhow, the posted system requirements would indicate that PG 7 requires the latest Mac OS, and it may run on earlier versions. Had I known this before I started this morning, I would have left well enough alone. At least for now.

Thank you to everyone who reported this problem.